Veslee have got a test report, which is of high value! 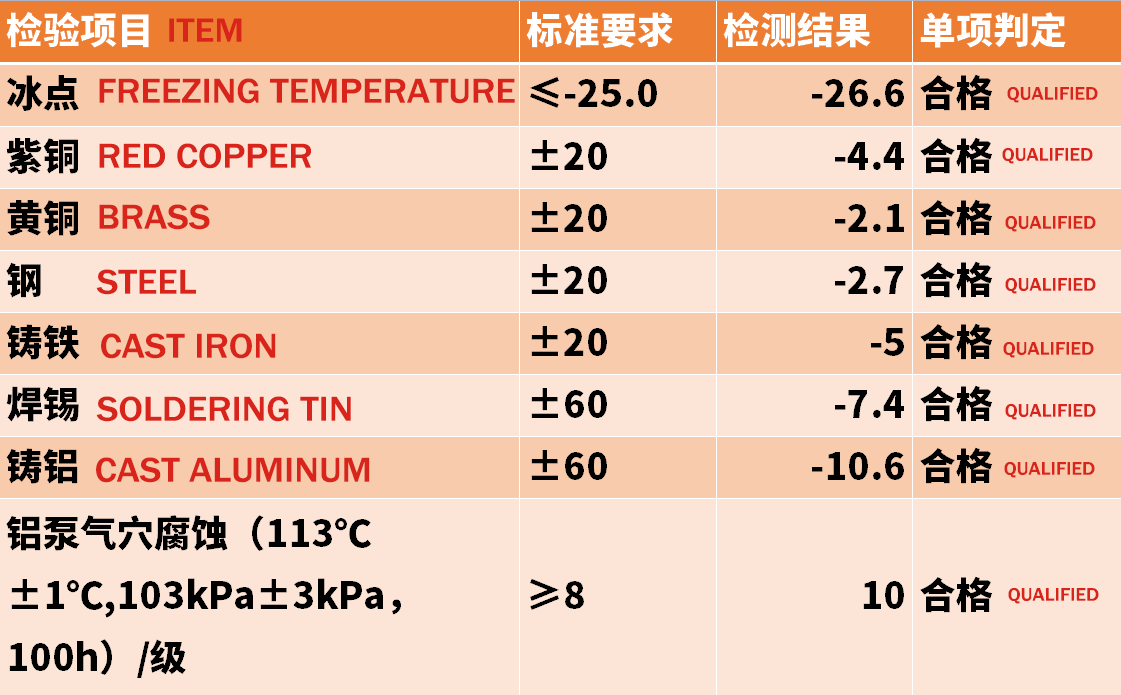 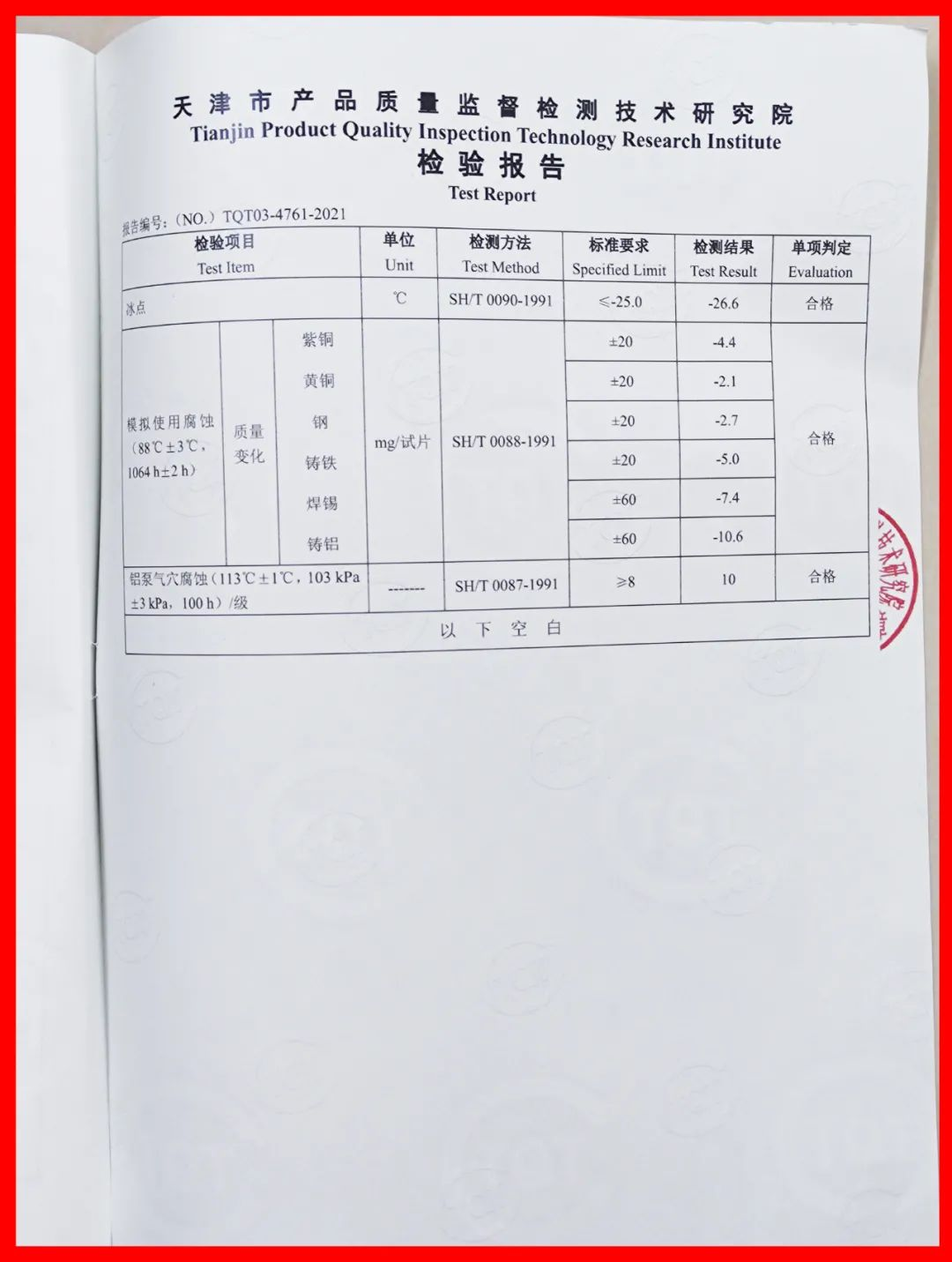 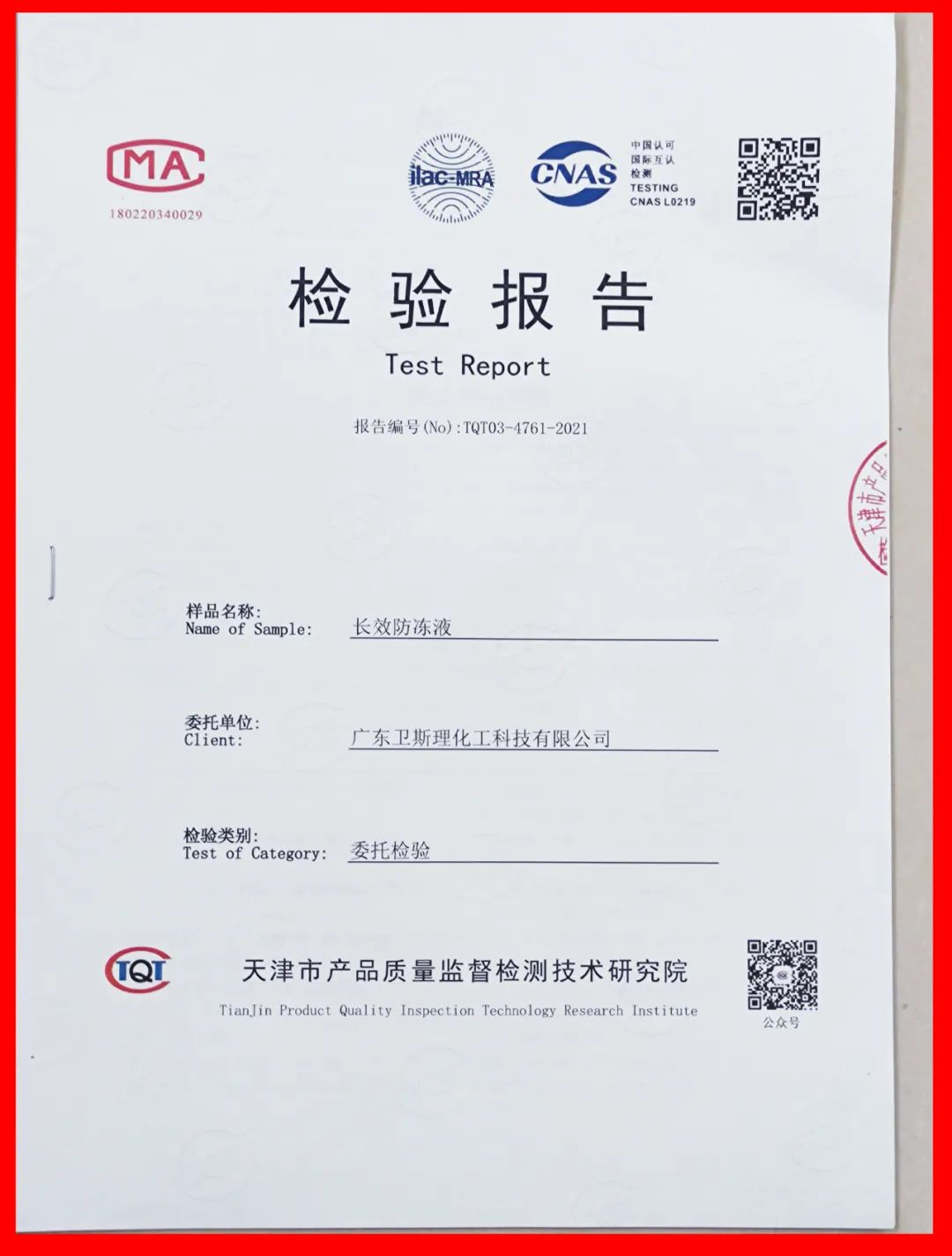 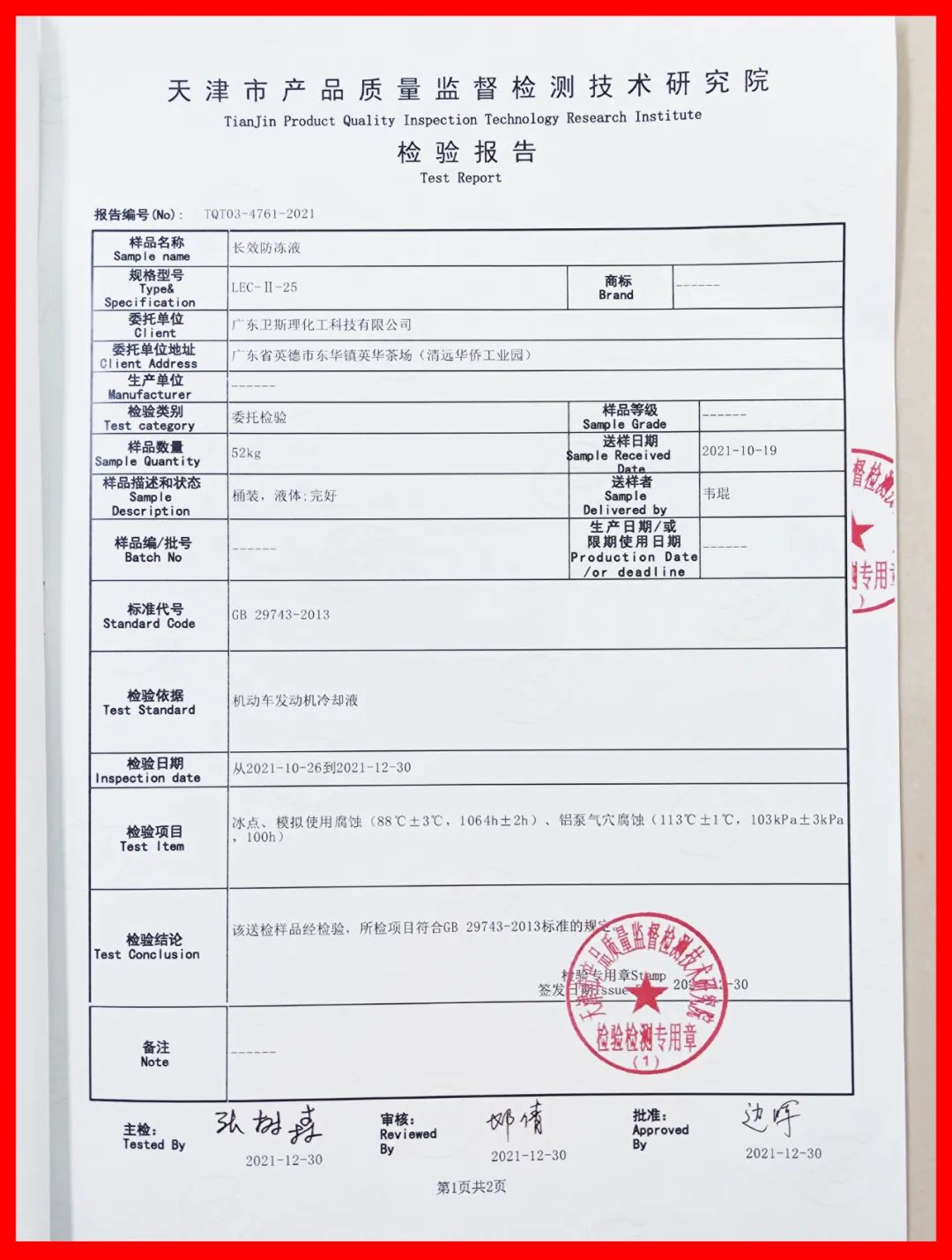 Do you know antifreeze fluid? 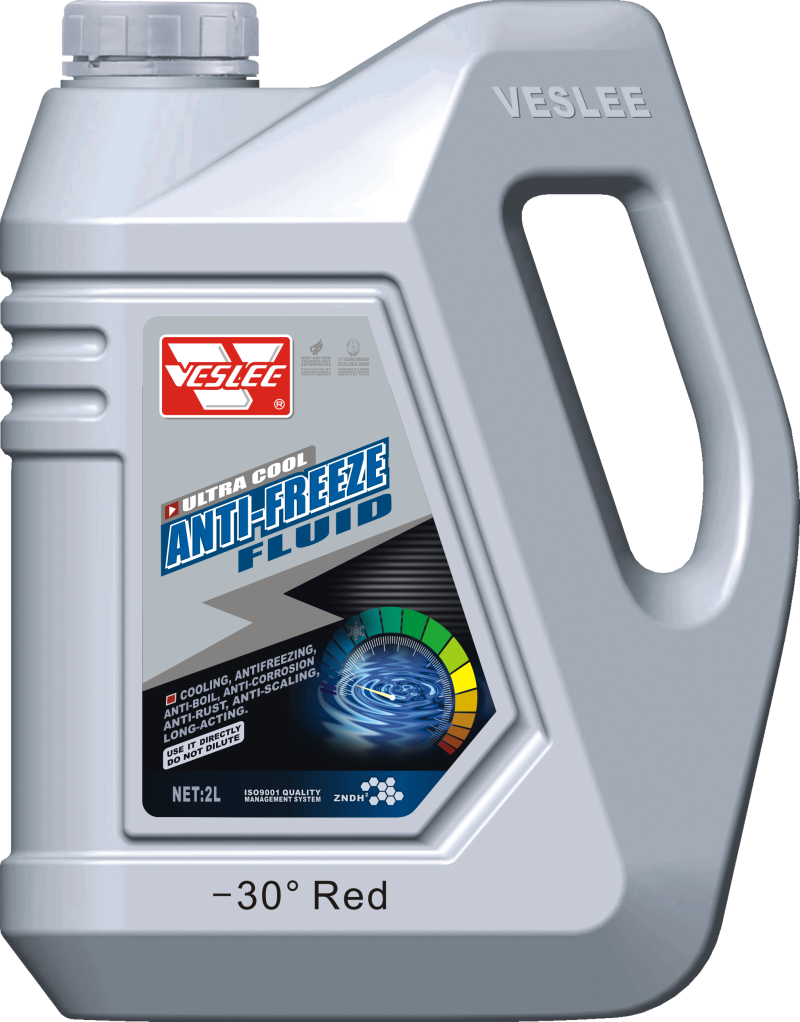 Antifreeze fluid can prevent the coolant from freezing and cracking the radiator and damaging the engine cylinder block or head when parking in cold winter.

In addition to antifreeze, antifreeze fluid has the following advantages:

Anti corrosion function: the engine and its cooling system are made of metal, including copper, iron, aluminum, steel and solder. These metals will corrode and rust when they come into contact with water at high temperature. The antifreeze not only does not cause corrosion to the engine cooling system, but also has the functions of anti-corrosion and rust removal

Automobile, train internal combustion locomotive, tractor, ship, engine, water tank and various mechanical equipment, diesel engine, gasoline engine and other cooling systems used as coolant. It has a variety of functions such as anti-freeze, anti-boiling, anti-corrosion and water-proof scale. The boiling point of water is 100℃, the boiling point of high quality antifreeze coolant is usually 110℃ above zero, so that when used in summer, antifreeze coolant is more difficult to boil than water. The most headache for drivers using water as coolant is the problem of limescale, which adheres to the metal surface of the water tank and water jacket, making the cooling effect worse and worse, and it is difficult to remove. High-quality antifreeze is manufactured using distilled water and with anti-scaling additives, which not only does not produce scale but also has a descaling function. Of course, if your water tank scale is very thick, it is best to use the tank cleaner to thoroughly clean before adding antifreeze. Like water, it has the advantages of large specific heat, high latent heat of evaporation and easy replenishment. When the ambient temperature is below zero, the water in the cooling system will be transformed into ice, and the components of the cooling system will be in danger of being cracked by expansion, when the choice of antifreeze can ensure that the engine works normally at low temperatures.

With the improvement of engine structure and material technology, modern car engines compared with the old engine, a significant feature is the high operating temperature of modern engines, the normal upper limit of working temperature is generally more than 100 ℃. Domestic cars, for example, the normal working temperature of the engine is: Shanghai Santana 90 ℃ ~ 105 ℃, FAW Jetta 85 ℃ ~ 115 ℃, Fu Kang 90 ℃ ~ 118 ℃. If all water injection, when the engine temperature reaches 100 ℃ will be boiling water "boiling", in addition, the water is corrosive, will produce scale affect the cooling effect. Therefore, we must use a special cooling medium - antifreeze.

Some people think that antifreeze is specifically for vehicles in cold areas, which is a misunderstanding. The main component of antifreeze on the market is ethylene glycol, which has a high boiling point and a low freezing point. Antifreeze also contains additives to prevent the oxidation of glycol (which can form corrosive byproducts), prevent corrosion, and prevent the production of foam, etc.

First, the parts of the cooling system play a role in anti-corrosion protection.

Second, to prevent limescale, to avoid reducing the role of radiator cooling.

Three, to ensure that the engine can work within the normal temperature range.

Therefore, the engine antifreeze, must have the characteristics of anti-freeze, anti-cracking, anti-corrosion, waterproof scale, no foam, and is not affected by the season and the region. Among them, freezing point and boiling point are the basic indicators of antifreeze.

Previous :  How to clean the engine surface by yourself?

Next :  Do you know all these car maintenance tips? [VESLEE car workshop] 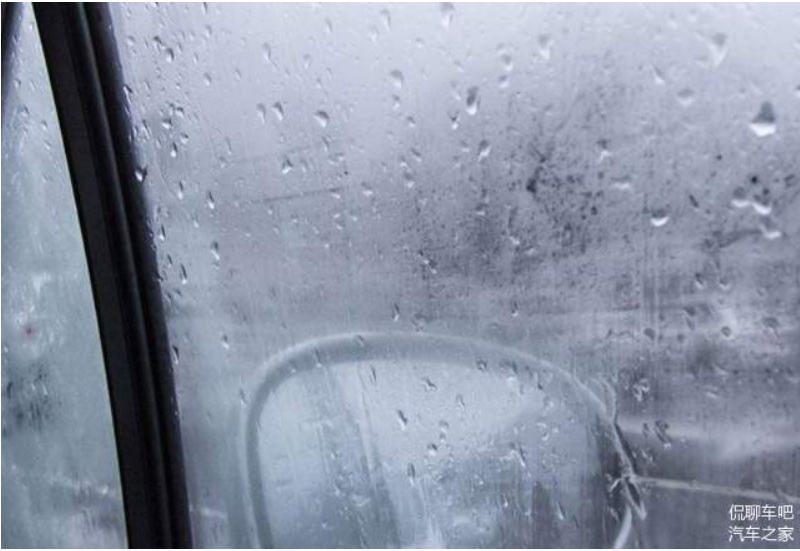 There are many dangers when driving with foggy windows. How should we solve them? Supplier China car care products car cleaning products glass cleaner glas... 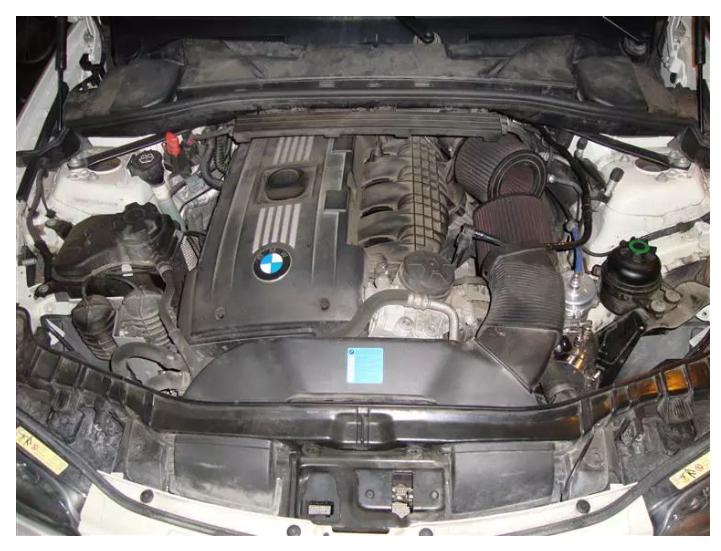 How to clean the engine surface by yourself? the engine compartment can not be cleaned only by water.